I'm constantly tweaking my various organization systems.  Perhaps no other aspect of this tweaking has gone through more transformations than the way I store my stamps.  Presented here are just a few of the evolutions.  One thing I should mention at the outset is that ALL of my rubber stamps are unmounted - no foam or wood or anything (this includes what used to be "wheels")!  I use Sailor 2-in-1 Glue on the backs to make them tacky so they'll stick to my acrylic blocks and the carrier sheets that I use.

Before I acquired the overly large collection that I currently own, I had mostly Close to My Heart photoploymer stamps.  They came in plastic sleeves with a foamie backing thingie.  I took them out of the sleeves, trimmed backing sheets to fit, added a tab with the stamp set name, and put them in boxes like this: 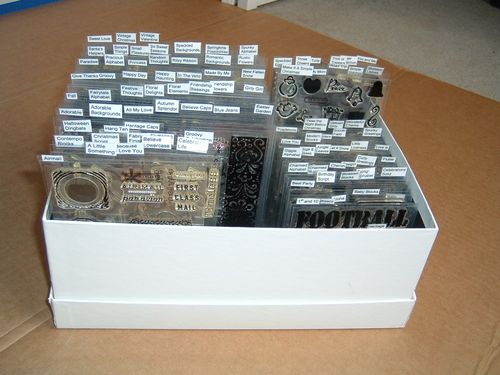 Eventually I got tired of trying to figure out where to park the box and acquired a nightstand or small dresser or something like that and put them in the drawers: 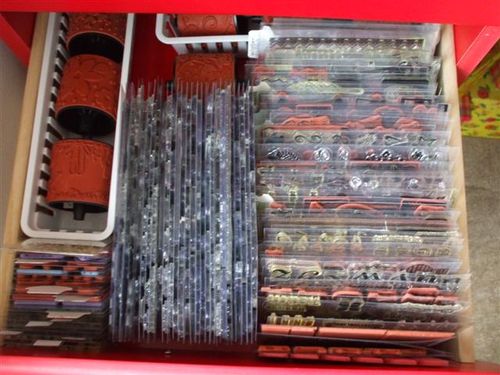 I also had some of the cheap organizing baskets with my Stampin'Up! wheels in them.  Another drawer had more stamps and more wheels and the handles for the wheels: 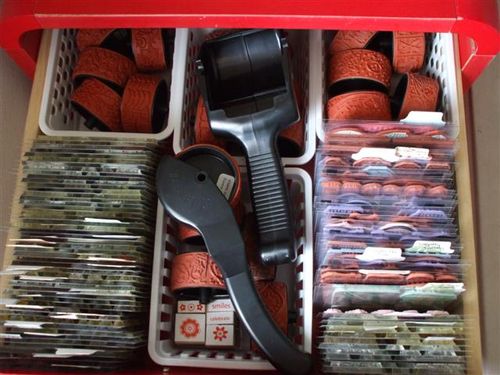 Yes - you do see unmounted rubber in there, as well.  I cut transparencies the same size as the CTMH stamp sets and put my rubber ones on them, so everything would fit together:

Eventually I moved and got rid of the drawers and re-vamped (again).  Stampin'Up! had just started to offer their stamps on cling foam instead of wood-mounted, and they came in DVD-style cases, so that was my next "method": 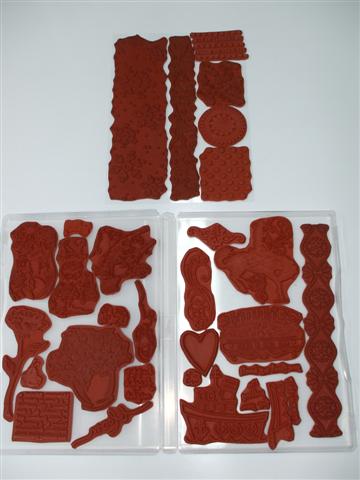 Since I didn't have foam or anything on the rubber, I could fit three layers of stamps in each case by sticking stamps to both covers and making an additional sheet to lay between.  I even had the perfect place to put them: 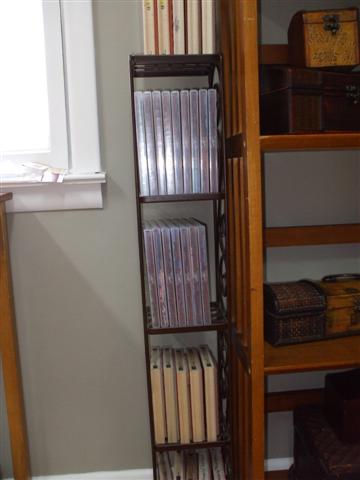 I got tired of opening and closing cases all the time, and I hadn't really thought through my categorizing plan very well, so I got frustrated with this system eventually.

Photo cases were my next storage solution, and laminated file folders from the school supplies at WalMart were cut down to make the carrier sheets: 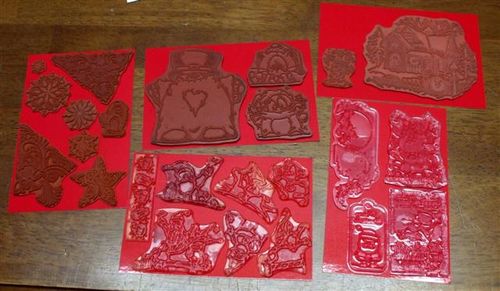 These were organized by manufacturer (alphabetically) and stacked about 6 cards to a case.  All of the cases were lined up on a shelf like this:

I had the same problem here as with the DVD cases - had to keep opening them to retrieve what I wanted.

I read a thread over on Splitcoast Stampers about storing stamps, and one of my fellow SCSers used laminated cardstock in page protectors to store her stamps.  This idea appealed to me, but I tweaked it a little bit. I wanted to use the 5 1/2" x 8 1/2" binders and page protectors.  I cut cardstock in half, put one half in a laminating folder, run it through the laminator, and cut it in half.  The half that is just laminated to itself is used as a "cover sheet" over the stamps so that they won't stick to the page protectors.  I also round the corners with my Corner Chomper. I also stamp an index sheet to slide into the page protector with the stamps so that I'll have a reference and can easily see which stamp I want to use and where to put it back: Since I took the pictures above, I've reorganized all of the stamps.  Instead of having them organized alphabetically by manufacturer, I've broken up all of the sets and put the individual stamps into categories by theme.  Because my eyes are getting old and tired, I stamp a few representative images of what is in a particular binder, as opposed to titles.  MUCH easier to see at a glance which binder has what I'm looking for! 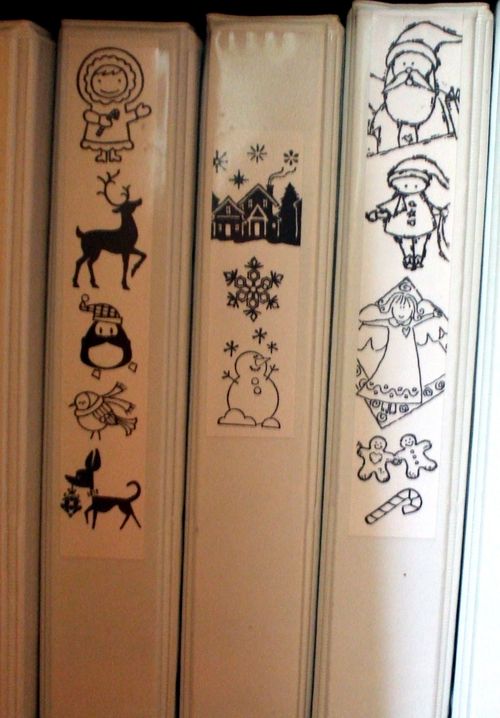 This is especially helpful with alphabet sets: 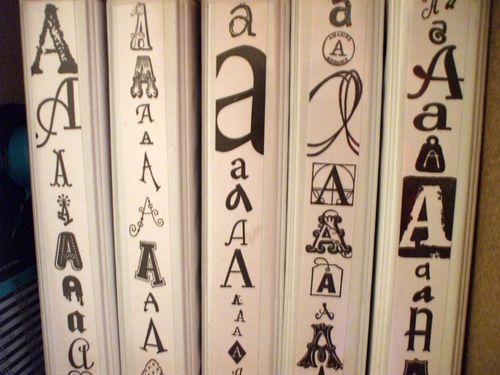 I do have one drawer that contains stamps that can't go into the binders: 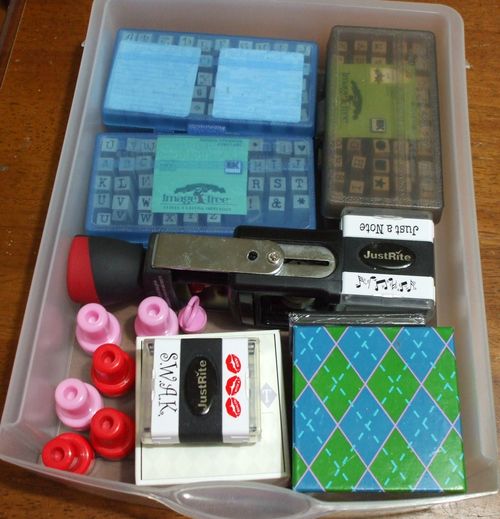 There are a few self-inking stamps from JustRite and from Target's dollar spot, my date whomper from a previous life as an office manager, and some peg-style alphabet stamps.  They're very small letters, so they work better on the pegs than on acrylic blocks (in my opinion).  Somewhere I read that a good way to store them was in ammunition boxes (sporting goods stores carry them - some Walmarts do, too) and it's true: 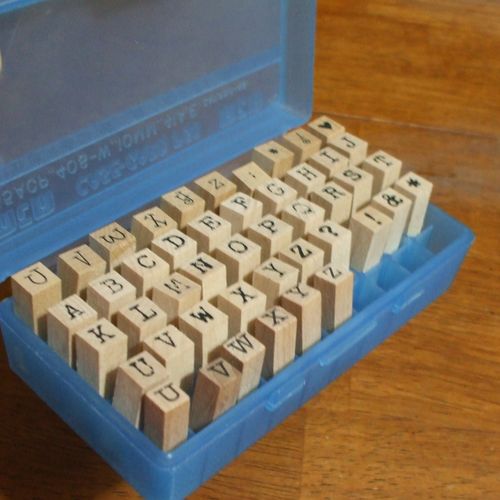 There are different sizes for the different gauges of shells, so take one of the stamps with you when you go shopping to make sure you get the right size.

So - how do you keep track of all of the stamps once you get them binder-ized?  I have an Excel spreadsheet that lists all of them and a binder that has pictures of the complete sets in case I ever want to put them back together again.  Another idea that I got from Splitcoast was to make a binder with trading card pages and stamp individual images to put in them by category.  I started that project: 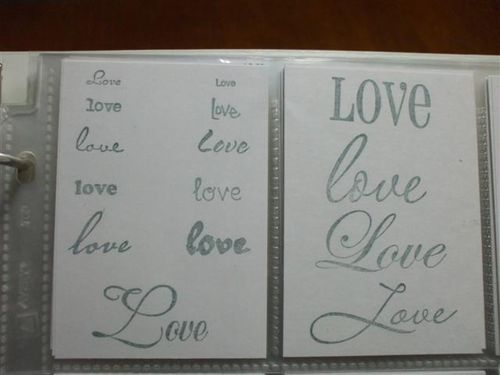 but I decided that the binder was too unwieldy for me to be happy with, and I was going to need multiples, so I re-geared.  I bought the cheap photo albums from AC Moore (the ones you get for a buck) and a stack of index cards (cheaper and easier than cutting down cardstock) and stamped out pages of similar images by category: 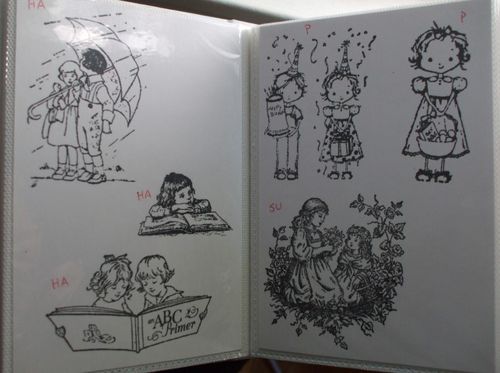 The little letters in red indicate which company the stamps are from.  I have a "master list" key: 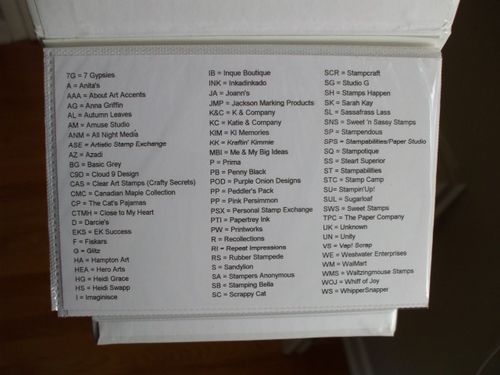 The photo albums are kind of redundant, because I can flip through the binders of stamps just as easily, but it's kind of fun to just flip through them when I want to get a mojo kick (or just admire my collection).

I started using an app called Evernote that syncs across my phone, laptop and Kindle Fire, but I got sidetracked and haven't gone back to it.  Great app, though - and free is good!

Ink storage - both the pads and the reinkers - is an ongoing work in progress for me (like everything else in my life - yours, too, probably).  I try to keep things as compact and consolidated as possible, and there's no getting around the fact that a bizillion ink pads take up a lot of space - physically and visually!  I also keep changing my mind as far as which inks I prefer, so that doesn't help, either.  My latest step in the evolution is to buy reinkers of the inks that I want and make my own "spots". Here's how I decided to store them: 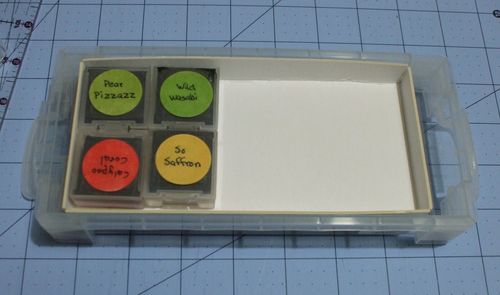 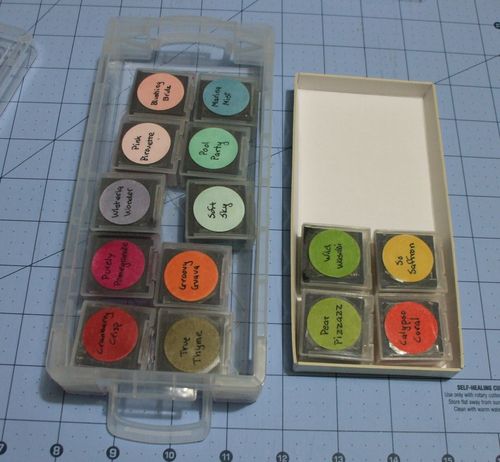 These are  pencil-sized Really Useful Boxes and a tray I made from mat board.  Instructions for the spots and the trays are  HERE.

I also have some commercially-produces cubes that do not fit in the Really Useful Boxes, so my solution there was to re-purpose a 6" x 9" clamshell case that wood-mount stamps originally came in: 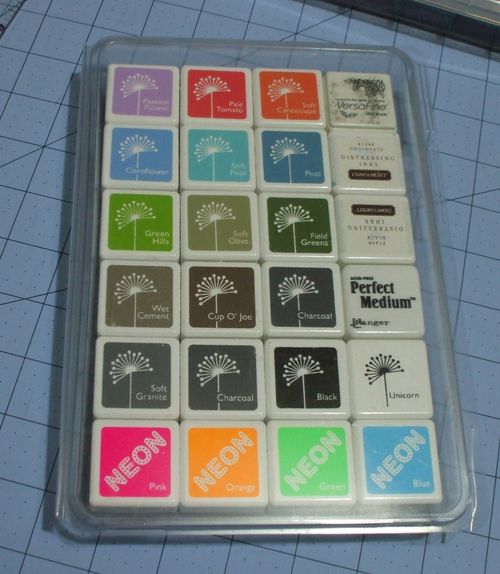 I'm still trying to land on a system for the full-size pads that I can live with in the long term...