NOTE:  Since I originally published this tutorial, it has been refined and re-written and published in the Resources section of Splitcoast Stampers.  There is also a video, for those of you who prefer that.  Here's a link:  Flip-Top Box

Remember that I said Greg came in handy sometimes?  Here's another reason:  he is a smoker (I love him dearly, but wish he'd quit FOR GOOD - he's quit for temporary several times...), and when I went to take out the trash a while back, one of his cigarette packs was right on top.  I was going to just toss it out, when I noticed that it was kind of a cute shape and size (refer to my earlier comments on the random weirdness that is My Brain), so I plucked it off the pile, opened it up, measured and made a template, and now I'm sharing it with you!  I don't want to call it a "cigarette box", though, so I'm calling it a flip-top box: 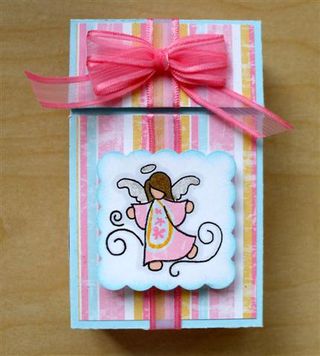 I apologize in advance for the quality of some of the pictures, and for my very lame template pictures in particular.  Understand that I am just trying to give you visuals to go by, and not some polished production.  With that being said, let's get started:

Score down the entire 9 1/2" length 7/8" in from each side.  Score remaining scores according to template pictured below - blue lines are scored only from scored line to scored line, as opposed to across entire width of piece.  Measurements are where you will place the paper on your guide, not the distances between lines: 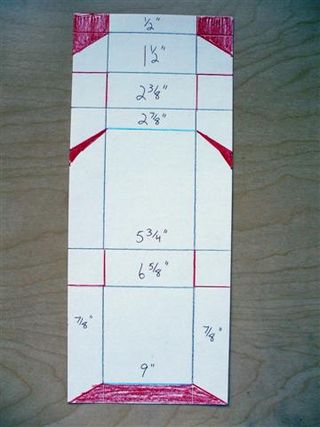 The red areas and lines are where you will cut.  To get the cutting lines that are angled, mark as follows:  1/2" below line scored at 1/2"; 1/2" and 7/8" below line scored at 2 7/8"; and at outer corners of bottom edge.  The funky cut (it's sort of angled) from the 7/8" mark to the blue scored line at 2 7/8" is just to make this area of the box a bit more stable, and I didn't measure and cut - just sort of eyeballed it.  You just want it to meet up with the other cut at the inner point, but it's not critical that you make it all pretty, or that the two sides match - you don't see them when the box is folded up.  After you've made your cuts, fold along all scored lines, folding the line at 2 7/8" the opposite way (this is the hinge of the box top).

At this point, decorate the box as you desire - stamping, designer papers, whatever - but bear in mind that the 1 1/2" section at the top and the lowest section at the bottom will be the front of the box when you're done, and that the lower section is upside-down as you are looking at it now.  To make it easier on myself, I used a pattern that was not directional.  You could even do one strip up the whole thing (or make the whole box out of double-sided paper if it's heavy) and call it a day. The sections that don't have the striped paper will be inside the box, so I didn't cover them: 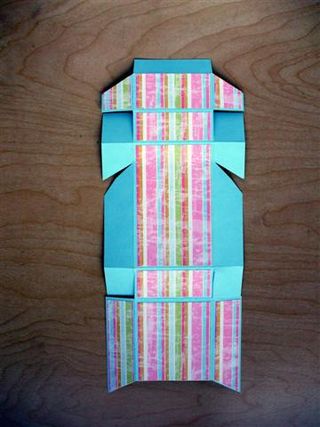 This next template is just to give you a reference for the folding and gluing part of this project: 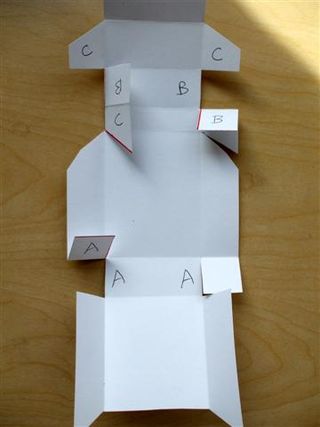 Fold and glue as follows:  Flap A to box bottom A; flap B to box lid B; flap C to outside of flap B/C; 1/2" flap tucked to inside at box lid, as shown below: 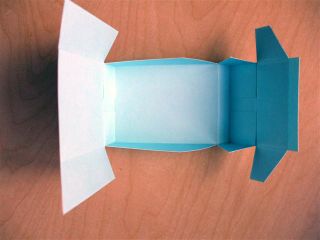 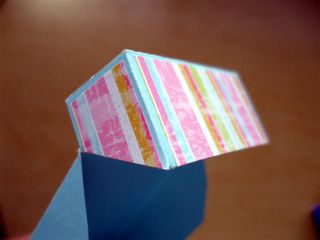 Also fold in and glue the sides of the box. 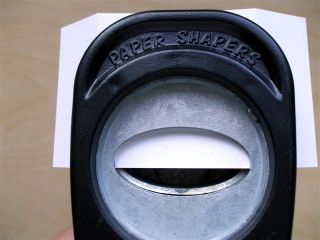 then round the edges with your scissors: 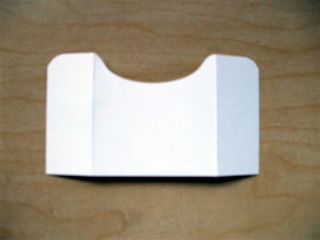 Insert and adhere this piece to the inside of the box so that the corners are 1/2" above the edge of the box opening: 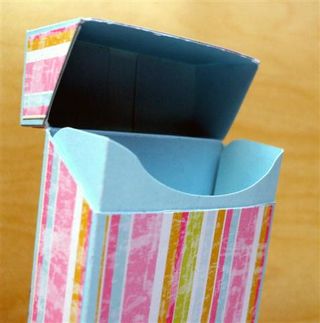 This is important, because it keeps the box shut without any help at all!  Your box is now finished and ready for embellishing: 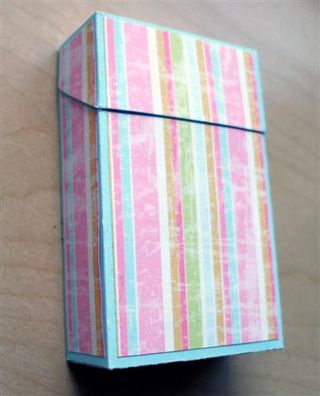 So, what do you do with a box this size?  How about a set of cute little cards? 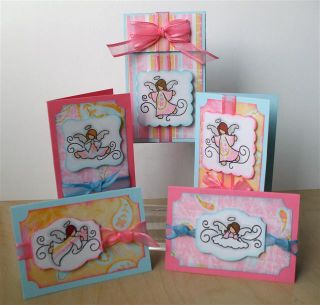 These were all made with "Precious Paisley" papers and the "Angel Sent" stamp set from Close To My Heart.  I paper-pieced their dresses, colored their skin and hair with Bic Mark It markers, and their wings and halos with a Sakura Gelly Roll glitter pen.  The heart the one little angel is holding has Cotton Candy Stickles.  All the ribbons are Offray, and I used some punches (of course!)  I wanted to add dimension without bulk, so I inked the edges of the papers and punched shapes.  I did use foam tape to mount the angels to their cards, though. 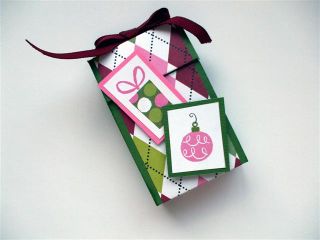 Here's what's inside of it: 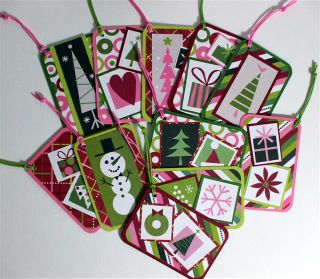 It's a bunch of gift tags!  They're kind of hard to see in a pile, so here's a couple of pics of them in smaller groups: 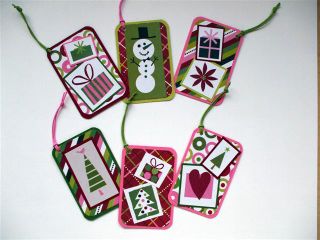 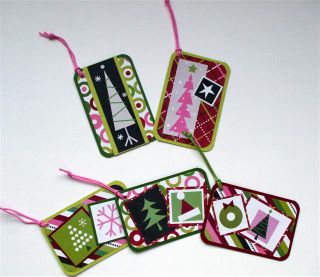 They are all made from these fun papers from The Rob and Bob Studio (Provo Craft): 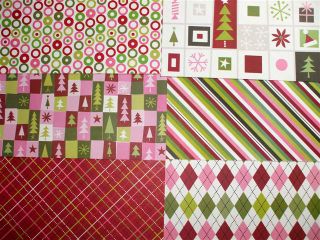 I bought this Christmas slab a couple of years ago because I thought the patterns and colors were so fun and funky.  It's been languishing since, though, because I couldn't really make up my mind what I wanted to do with it (sound familiar?).  I finally decided gift tags would be fun, and this sheet in particular lent itself well to cutting up individual elements, which I did: 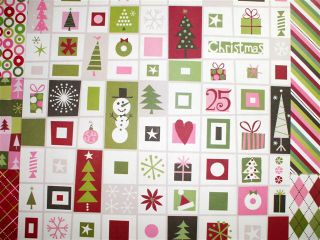 All I did was cut 2" x 3" scraps of cardstock that matched the dp and round the corners.  I then cut 1 13/16" x 2 13/16" scraps of the dp itself for the front of the tag, and plain white cardstock for the back of the tag, and rounded the corners and adhered them.  Then I cut out elements from the sheet above and added them (sometimes matting, sometimes not).  The backs of the tags have elements cut from the tree block paper, and look like this: 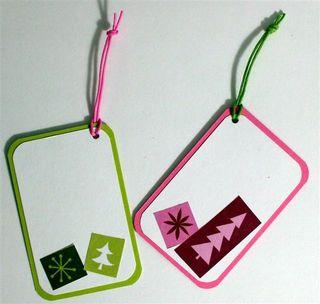 I planned to stamp "to" and "from" on them, but I don't have any to/from stamps - can you believe that?  Over 300 stamp sets, a slew of individual stamps, and not one to/from stamp!  Unbelievable!  I have a bunch of alphabets, but I'm too lazy to do it that way, so I'll check the dollar pile o' stamps next time I'm out and see what I can find...

For the hangers of the tags I punched a hole with my Crop-a-dile and threaded "braiding cord" ("like hemp only better", the package says) through it.  And that's it for this little project!  No stamping  - just cut-and-paste!